"Its time that people begin to understand money, and the pressing need to fundamentally change the way it works."
Money as Debt 2

I have found some of this quite hard to get my head around, but from watching Money as Debt for a third time, I've made some notes on how I understand the current system of banking to work, so thought I'd share that here for anybody not so inspired to watch the full documentary.
(You can see all of the documentaries on a separate page here)

So, in a nutshell, these are the points I have taken from this.
So - if all debts were paid off and cancelled out, there wouldn't be enough money in existence for things to keep going... (Apart from in the bankers pocket.)
This is what happened during the great depression in the US. 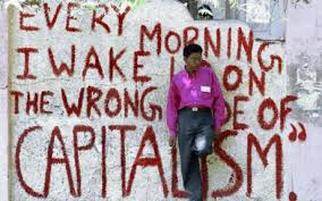 "I am afraid that the ordinary citizen will not like to be told that banks can and do create money. And they who control the credit of the nation direct the policy of governments and hold in the hollow of their hands the destiny of the people."
Reginald Mckenna, past Chairman of the board, Midlands Bank of England. (my old bank..)

Perpetual debt spirals
There is an ultimate shortage of non debt money to pay off interest as all the other money is caught in this spiral of paying back loans.. SO when you also need to pay off interest, which is often very large, the banks need to create more money to cover this, (which means creating more debt/loans to the public) but then this of course creates more interest that needs to be paid, so then more debts need to be created, and the spiral continues... it is only the time lag of repayments that keep it going.
I am beginning to understand now why when the UK faces a recession, we are encouraged to consume. I never understood that before, as it always seemed like backwards logic. It is backwards, but in this system it makes perfect sense.

"This is a staggering thought. We are completely dependant on the Commercial Banks. Someone has to borrow every dollar we have in circulation, cash or credit.
If the Banks create ample synthetic money, we are prosperous; if not, we starve. We are, absolutely, without a permanent money system.
When one gets a complete grasp of the picture, the tragic absurdity of our hopeless position is almost incredible, but there it is."
Robert H. Hemphill, credit manager, federal reserve bank, Atlanta, Georgia. 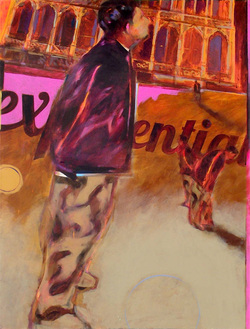 Exponential growth, by Thomas Kast
As more money enters the world there needs to be the same growth in the volume of global trade and production, or the money would lose its value and become more worthless. And it is. The economy is growing at 3% a year, and this is exponential growth,  so resources need to be taken at an exponential rate also to provide for this.
This is clearly a very unsustainable system. We don't live in a world of infinite resources, yet this spiral of debt needs to keep continuing at an ever increasing rate to keep itself and our society as we know it going. Isn't a collapse inevitable?

"Anyone who believes exponential growth can go on forever in a finite world is either a madman or an economist." Kenneth Boulding, economist.

"Money is a new form of slavery, and distinguishable from the old simply by the fact that it is impersonal-that there is no human relation between master and slave."
Leo Tolstoy.

"The modern banking system manufactures money out of nothing. ... Take it away from them, but leave them the power to create money, and with the flick of a pen they will create enough money to buy it back again...Take this great power away from them and all great fortunes like mine will disappear, and they ought to disappear, for then this would be a better and happier world to live in. But if you want to continue to be slaves of the banks and pay the cost of your own slavery, then let bankers continue to create money and control credit. "
Sir Josiah Stamp, Director, Bank of England 1928-1941 (reputed to be the 2nd richest man in Britain at the time)
"The entire world economy rests on the consumer; if he ever stops spending money he doesn't have on things he doesn't need we're done for. " Bill Bonner, author, publisher and columnist on economics and money. 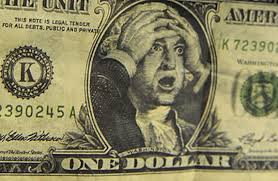 There are 4 very interesting questions brought up in the film..


For the first question, to be honest, I just don't know. Perhaps if I do some more research into this I'll find out, but I feel a little reluctant to be getting deeper into that now. I'm sure it has to do with the immense power of the banks controlling government policy, but I feel quite weighed down with this old system already, and want to hurry up and get onto some solutions. So I'll leave that one for now in the minds of my conspiracy theorist friends.

The same goes really with question 2. I imagine, with what I know about this system, is that if money was to circulate freely, nobody would be making a huge profit, as the bankers are now. So really, the question could be turned around to say "Why would those in controlling this system want to allow money to circulate freely when they are making so much money out of the system as it is?" This leads me to feel that it is the bankers who are running the show here, and the majority of the population and the Earth and her resources are working incredibly hard to make sure that they keep getting richer and richer.

There is a very basic idea here, that if one person loans all the money in a system, and charge's interest, and keeps doing this, they will eventually end up with all the money. Is that what's happening?

OK, so onto question 3. How can this system be used to build a sustainable economy? I don't see how it can, to be honest. If the system is dependant on increased growth and input from the Earth, and we are already well over what the Earth can sustain, something has to crash. The Earth is crashing already, and quite definitely this system will crash unless some large changes take place. In the documentary there were several suggestions as to changes government can make to change this system. If those things happen in time that would be wonderful. Take a look at the documentary Money as Debt 1, towards the end, if you are interested. I have chosen to focus on the ways that I can personally have an impact on building alternative systems and be a part of a better path. This is the direction that I want to focus on for the rest of this project, and hopefully this work will allow me to find answers to question number 4.

One thing that is very apparent to me here is that the main structure that the majority of the world - individuals and governments- uses to finance their lives is based on things that are not true. On things that don't actually exist in the real world. And it is only through clever manipulation that this works at all. And, on top of this, it is a fully unsustainable and environmentally (and humanly) draining and consuming system. And when it comes to International trade, as I have seen in resources such as 'The end of Poverty', it is not so much dishonesty in place, but very careful planning to make sure that a select few benefit greatly by taking advantage of the majority.
There is no honest money system in place here, one that serves the people and their communities. Or that is working towards the benefit of the majority. 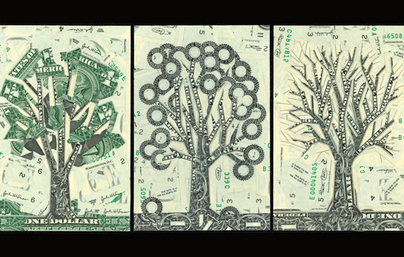 Doing this research with these documentaries has helped me to gain more education and understanding of the main monetary systems in place in the modern world, and recognise my current part in this.
I feel like I have a clear picture (well, clear as it may get) of how banks operate, and of how money now mostly exists not in cash form, but in the form of debt, loans made out from the banks. And how this system is inherently flawed, as it depends upon continuous growth, in a world of finite resources. I have also dipped into understanding how the balance of poverty and wealth in the world remains, not by misfortune but by careful planning and consideration of those in power. This is a subject I would like to explore much more deeply, but I have a limited time to complete this design, and whilst immensely interesting, it is going off track with what I am trying to find out. Hopefully I'll have time to explore all things that come up at another time.
One last thing here (if you can stand it) is a link to an interesting, if angering document that discusses banks funding arms trades around the world.
http://www.waronwant.org/attachments/Banking%20on%20Bloodshed.pdf

Back to the main project page here