Project review
This project has been super fast from start to finish, over a much shorter time frame than any other project so far.  And in many ways this was perfect timing for me, as I had fallen behind with some diploma work, after finding it a real struggle keeping up whilst living and working at the farm without internet access and much free time. So the opportunity to take part in a fast and pretty straightforward design was just what I needed.
I feel that the project in general went really smoothly, though there were some problems with group dynamics and communication, which I have mentioned in more detail in the section below 'of working within a group...'.  This for me was the only real setback. I would also like to have had more time to invest into more thorough design work, really getting to grips with practising some of the design skills that I read so much about. But I guess that's what upcoming projects are for...

Professional review
Finally getting myself into a land based design feels that I am making progress with my hopeful future as a permaculture designer. When questions opened up in my mind along the design pathway I felt I had a much greater understanding of where to look for the answers compared to when working through a life based design. Life designs are so much more personal and there seems to be a lot less information out there (that I have seen anyhow) that helps you through the design process in a clear way. And after so much reading of the 'conventional' permaculture books (David Holmgren, Bill Mollison etc) when it comes to a land based design I have a much better idea of what tools to use or where to go. I think this tells me that I could benefit greatly from some life based permaculture reading.
I also get a huuuge feeling that this is just the beginning of my journey. I know that I could have gone much deeper and into more detail with each stage of the design process here. Perhaps this project wasn't the one for that, it was very straightforward and also had a short time limit. In this way it feels like exactly the right project for me to be undertaking at this stage of my learning journey - it has opened many doorways into methods of analysis, observation etc that I hadn't had the chance to practice just yet. I hope that I can now find a next project that will give me the opportunity to develop all these skills much further.

Personal review
I really enjoyed working with a place not connected to permaculture or the farm I am living on, it felt like a breath of fresh air. And to see how positive the response was to our being there and our work was so energising. Working for a good cause like Freedom House has been such an pleasure, it felt like a real honour for Lisa to allow us free reign over her space and to put her trust in us.
I feel that I learned such a great deal from the experience of working within a group of designers, and also within a larger group of the community that helped us to implement the design. That was all a really important lesson in the importance of group dynamics and of the proper energy and attention that needs to function happily and healthily.

Of working within a group.. 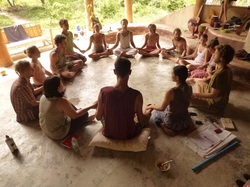 As this project started it was introduced as a Panya community outreach project,, one that anybody who was interested in could take part in. As the workload at the community is already very heavy at this time of year most members said that they couldn't spare the time for the designing but would all be happy to come along for the weekend to implement the design together. So it came to be that there were four main designers - Lucy, Mich, Leen and myself. We began by having group design meetings which any other volunteers were welcome to join in, and we especially welcomed anybody who had an interest in observing a permaculture design from start to finish. We were joined in our first meeting by several short term volunteers who were mostly interested to observe and who also were able to offer some input. We had several meetings that first two weeks alongside the four of us meeting Lisa at the Free Bird and listening carefully to exactly what she was hoping to create. After these meetings we felt that we four should have some authority on the design and what was going to be introduced as we had the knowledge of the vision and goals of the project.

As the preparations got underway for the design we faced some challenges within the group. Mostly we worked together really well, meetings were clear and productive, (showing that all that practice in weekly Panya meetings has finally paid off!) and we all felt heard and our views respected. But as the deadline drew closer and time to prepare was running short, communication between some members of the group was not as effective as it could have been, and with one of the group being taken away for a workshop over the final few days the dynamic quickly changed from a harmonious co-operative feeling to one with a lack of full understanding for each other. This was not an effective working environment and it took valuable energy away from where it was most needed.
Looking back now if this was checked straight away as it was noticed, and an NVC style conversation, (open honest and non-judgemental) was had between the group I think this would have helped enormously. But there seemed to be no time for that (or no priority was placed on that at the time) so it continued and got a little out of hand.
Something that felt very unfamiliar to me was to exert some authority over the design and the final outcome, being one of the few who had been involved from the visioning in the beginning. This made me realise how little I have had a dominant role for some time, and how I very often respond passively in group situations. It felt really creative and productive for me to be exercising this part of my being, a part that I clearly need to allow to breathe more often.

Something that I thought worked really well within the group was to call upon people with specialist knowledge to work on specific areas. With the water system in particular, from very early on I knew just who the people were who would be able to create the most effective system, and without their help I'm not sure it could have been installed at all. I really appreciated the wealth of knowledge that exists within a group such as ours, knowledge that you are so often unaware of until it is uncovered for something like this.
The evening before the implementation we came together for a managers meeting to list all of the separate jobs that would be worked on over the weekend, how many people would be required for each job, and also which people we thought would be best suited to each particular task. We found managing the volunteers like this to be highly effective, and I think the others also appreciated having a defined role when appearing on the site for the first time.

For the next time I work with others on a design, I think the following notes will be helpful to me;

Tutor review
Here is the review of this project by my tutor Rich.

Download File
Check in
Here is the check in I had with Rich just before p5 was to be handed in.