On our first meeting with Lisa we discussed at length her ideas and vision for the cafe garden.

We used an informal client questionnaire and discussed many things, brainstorming all the additions that could be made to the garden. This was really useful to really open up the possibilities and get everybody's imaginations going. After returning home I re-wrote some of these into a mind map, so they would be easier to understand and work from. You can the notes from this meeting along with the mind map below. 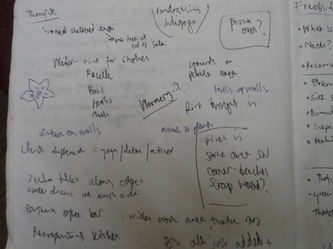 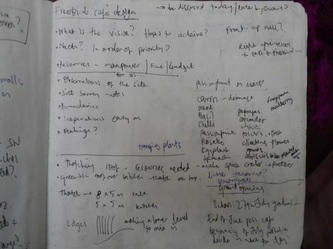 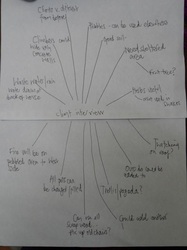 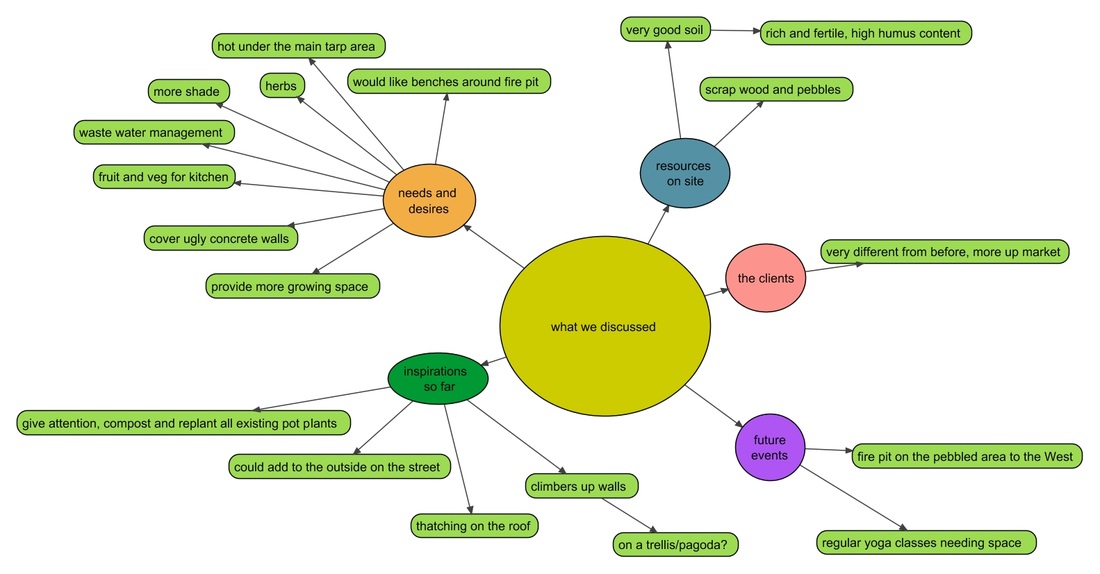 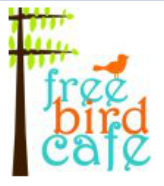 From our conversation it was clear that the main goals of this project are, in order of priority;


Lisa has no budget, and after the move is even struggling to pay the wages of the two Burmese waitresses who work in the cafe. Whatever we choose to do in the garden we will need to finance ourselves.

On a personal diploma note, I also have some goals connected with this project. I have only worked solo on designs during this diploma so far, and also focused only on life based designs. I am excited to develop my skills in effectively working within a group of other designers, as this is something that I want to include much more of in the future. I am also excited to be finally working on a land based design, and also to complete it within a very short and definate time frame. We will have to work efficiently and effectively to get things done on time, which are skills that are going to be very useful to develop. I will write about my experience and learning in the appendix. 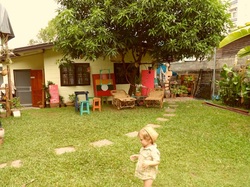 The cafe garden on our first visit
When arriving at the cafe garden for the first time, the thing that struck me was just how beautiful it was already. The ground cover was thick and healthy, and birds of paradise flowers mingled with banana plants along both sides of the garden. The previous cafe was well known for it's beautiful quirky wooden furniture and signs and murals painted by the children, and as that had all come to the new site it was already looking lovely. So it came to my attention very early on that we were not working with a blank canvas here; our job was more to enhance what was already there, and add to it whilst working within the same style.

Lisa's main priority was to make the place look as beautiful as possible to attract more customers into the cafe. The previous cafe had been inside the old city of Chiang Mai, in a popular backpacker area, surrounded by other cafe's and guesthouses, all appealing to a young traveller. The new cafe site is far from here, in an area most popular with the retired ex-pat community, and mingled with houses where Thai people and families may live, The surrounding guesthouses and restaurants are aimed at a slightly older and more upmarket crowd. A few doors down from the Free Bird is the restaurant of Punpun organic farm, and just next door is an expensive and beautiful hotel. Tourists also visit this area for yoga and detox retreats.

This all means that the customers of the Free Bird will be very different from before, and our design will have to take that into consideration. As we (the group of designers) all fit more into the first category of customers than the second, this will take some conscious checking on our ideas to make sure they will fit with the new atmosphere. Lisa has already mentioned that she would like the main part of the garden to remain clear, as early morning yoga classes have been offered by a volunteer teacher. She also wants to keep the garden clear for another reason; as the house is filled with a charity shop as well as now being Lisa's home, she feels a very strong need to keep a space that is uncluttered and open, for some breathing space. She is also keen for the garden to fit in with the atmosphere of the surrounding community. 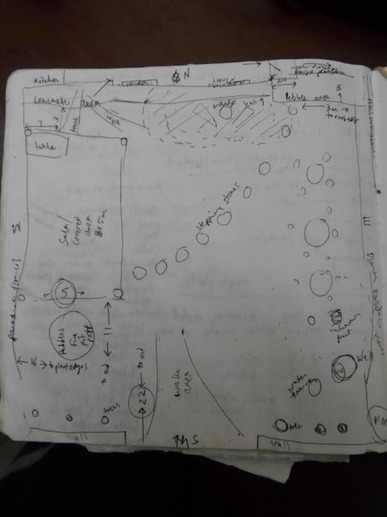 Base map of the garden
On first visit I drew a rough map of the site, with approximate measurements. And I have listed all the plants that are growing there already, and noted where they are.

The rest of the garden is covered in a thick wide leaved grass. In some places, where traffic of customers and staff is at it's greatest, the grass is beginning to thin. We marked out on our map the walkways and common routed where people travel, and noted not to plant anything in those areas that may obstruct this.
We also considered putting in some pathways to save the grass, but as the area is to be used for yoga sessions we decided it would not be practical. 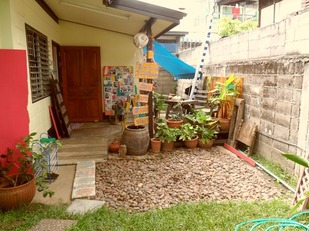 The side of the building showing wall to be painted
The garden is surrounded by concrete walls. Mostly these are covered by the tall birds of paradise flowers, but along the north east edge, near the spirit house there is a large area uncovered. Another voluntary organisation 'Art relief' has offered to come and paint a mural on some of the space, so has painted it white in preparation. This is ideal as we can see clearly just how much of the concrete will still be showing after the mural is done. We immediately thought that it would be very nice to have some climbing plants along these walls, to green the grey areas. 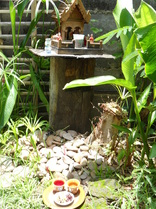 Spirit house
The spirit house itself is something worth mentioning; these are very, very sacred objects in Thai culture, and are placed in a very specific place. It is believed that spirits inhabit these little houses, and offerings of food and drinks are left there every morning, along with incense and candles. This house here was moved and then it was believed that bad luck was placed upon the cafe until a monk was called from the local monastery who then blessed the little house and after a long ceremony set everything right again.
Needless to say, we can't move this little house. And we will need to be very respectful of what we place nearby. 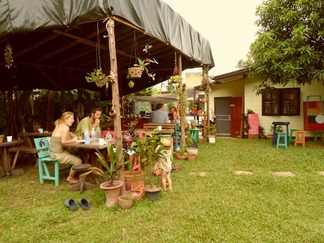 Showing the main seating area of the garden
The roof of the cafe seating area has been made with a black tarp pulled over a solid wooden frame. This was the cheapest and quickest way to create a shelter from the sun and rain, but it is not ideal; in the heat of the Asian sun it will get very hot underneath the black, and it also doesn't look particuarly beautiful. We immediately thought we could improve on this by adding a layer of thatching, (traditional Thai style roofing made with strips of dried grass tied with bamboo). This is the roofing that we use for the buildings at Panya, and a member of our community is very experienced in roofing in this way. This would keep the shelter area much cooler and if it was added underneath the tarp would also make the cafe area look much more beautiful. 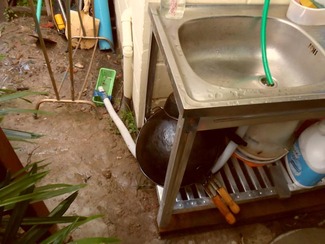 The water system
Looking around the site after our initial interview we came to the water system used for waste water leaving the kitchen. There was no system! The water from the sink was emptying down a pipe that ended into a small tray, filtering the largest chunks of food and debris. And that was it! The water was all draining straight onto a concrete floor, flooding the small alleyway that ran behind the house. The water ran all the way down the back of the house with nowhere to go, until finally draining out on the far East side. The area needed to be scrubbed and washed down daily, but even with that the smell of old food and dishwater was really strong. When I mentioned to Lisa that we should look for a solution to this in our design, she was clearly overjoyed. Sweeping this area down daily was a lot of work, and was using her time when it could be put to so many other important things. 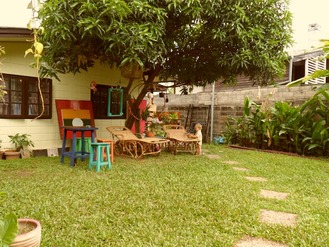 A large mango tree provides some shade
Over the short time that we were able to observe the garden we took notes on where the sun and shade were at different times of the day. And it seemed that the main area of the garden was in full sun for the greatest part of the day. This is apart from underneath the large mango tree to the front of the house, where two lounging chairs were set up to bask in the shade. We discussed the benefits of placing several trees in the garden to try and provide some more shade to the people who may be sitting outside. The Southern ends of the garden, in the corners nearest to the gates and the road, were more shaded as the tree cover here was much greater. These felt very much like the wild edges of the space. The South Eastern corner contains a large (and so far unidentifiable!) fruit tree along with a variety of several other smaller trees, which surround a covered well. A small water feature has also been placed here, and Lisa has said that she would like water to always remain here in some form, as she has been told that the garden was originally designed with feng-shui in mind, and so thought it may possibly be good to keep some aspects of that thinking in the garden.
Our knowledge on feng-shui was very limited, so we asked one of the volunteers at Panya to do some research into this for us. (You can see this later).

We next looked at identifying the zones of the garden, along with looking at movement of energy through the space. You can see these findings below. 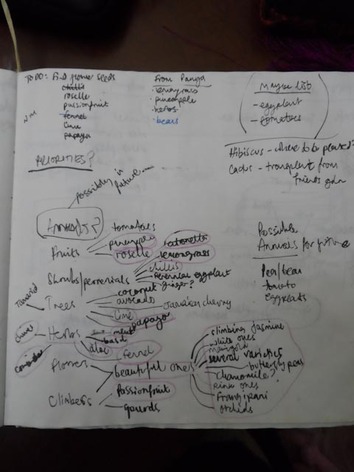 For plants, we thought as the garden needed to be very low maintenance, and was to be cared for by staff with little or no experience of gardening, we should stick with a majority of perennial plants, with only perhaps one or two easy to care for annuals. We also looked through the menu of the cafe and at what ingredients are frequently used by the kitchen. We also then considered how much the plant would cost at the local market,- as we have limited space growing the produce that is most expensive and difficult to buy would be of most value.

Here you can see the preliminary list of all possible plants.

When returning to meet Lisa the following weekend we talked these through ideas. We then chose a definate list of plants based upon their individual qualities and what they would bring to the garden. (You can see this list in the analysis section later on.) We also started to make plans for the structures and additions to the garden that we thought would be beneficial for the space. Taking into account the movement of energies through the space; traffic of people, movement of sunlight and water, we then talked at length the correct placing of each element.