Here is the final list of plants that we decided on, with some descriptions as to why they were chosen. 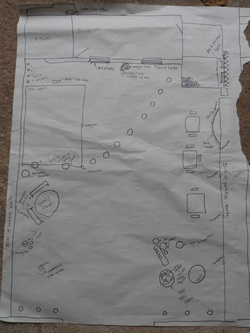 Final map of the garden design
Here you can see the finished garden design, showing the placements of the new plants.

The herbs have been placed near the kitchen, where they will most easily be spotted and used by the staff. The Kaffir lime was originally designed to be placed on the South-east corner of the cafe space to bring shade to the customers in the afternoons. When planting however Lisa observed that this would block the view of the cafe from passers by, and she was worried that this may discourage people from coming in. So it was moved to the area between the kitchen and cafe space, where it's leaves could also easily be picked for the food.

The many pot plants that were added and moved were not included in the design map, as they are very movable and so have no permanent homes. They were also placed on the day depending on their individual qualities and looks, so were unable to be planned here.
Below you can see some of the designs for the raised beds to go underneath the windows of the house. They have to be raised as when the rains are heavy the narrow concrete pathway underneath them floods, so having space underneath will give the water an escape route. And the pots, if filled with herbs, will be fragrant for the indoor space alongside being close to the kitchen for use. On our preliminary visit to the garden centre we found some pre-made wooden beds that we thought could be suitable, and as they were very inexpensive decided it could be better to buy them rather than spend our very limited time making them.

Design for the water system

We really wanted to create a water filter system that would effectively and easily be able to manage the waste water coming from the kitchen. A reed bed or banana circle was not very practical due to the lack of space behind the kitchen. I started researching different methods when a volunteer came to visit the farm who had previously worked with an NGO in Africa installing water systems. Amazing! So we began discussing plans to install a similar system here. Working out the specifics turned out to be quite challenging, as there is a slight raise in height from the ground level by the sink to the ground level of the garden, and so we turned to another community member who happens to be an expert in physics and all the complicated equations related to pressure and things like that. What a great coming together of skills.
Our friend with the experience had only ever made these with concrete before, so it was going to be an experiment to try with plastic, which was much more affordable, practical and accessible to us. But then this raised the problems of cutting exact round holes in a plastic box, sealing them and connecting pipes, all to be completely leak proof. So we went ahead with the plan, hopeful that we would manage to make it leak proof and that it would all work out ok. Together we came to the grand conclusion that - it might work. There was a chance that the height difference along with the pressure would be enough to cause the draining water to back up into the sink again instead of running down through the filter box. But we decided that it was worth a try, and if it didn't work we could always tweak the design whilst we were there. So we decided to go ahead with it.

Below is a selection of images showing the preparation of the garden design. Lots of work needed to be done gathering the materials that would be needed. We also paid a visit to the recycling centre to see what we could find that may be useful. An old bicycle and an antique lamp stand were brought back which were then painted to brighten them up. We thought these could be used as decorative and quirky flower pot stands. We also found a huge rusty iron bowl, which we scrubbed down and cleaned. We thought this may be great to create a larger water feature than there was in the cafe garden, as the lotus flowers Lisa has were looking a little cramped in their small bowl.
Now on to the actual doing, the implementation