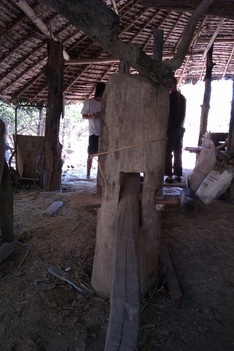 ..is a natural building and permaculture-inspired place just outside of Pai, Northern Thailand. The owner of the land is a Thai man called Sandot, a lovely bloke who lives there with his family. He is clearly a gentle and wise man, and lived the way he does on his land for years before he ever heard the word permaculture, as many folk do.
He has around five acres of land with many interesting and beautiful bungalows, a tree house, rice fields, a small pond for swimming, and a swamp for snakes. (perhaps not on purpose) Whilst we were there there was around 30 other folk staying there, mostly travellers, who lived as a community sharing cooking and mealtimes, and working together as they liked.


The rice from the fields had just been harvested and so me and Ohli helped out thrashing the rice with what could only be described as a giant wooden see-saw hammer. One person stamped on one end of the giant wooden beam, which then see-sawed up into the air with the other end crashing down into a giant pestle and mortar, hopefully just missing the hands mixing the rice in the bowl. This seperated the husks from the grains, and it was then sifted through the air in mesh trays to blow away the husks.

Cotton was also grown on the land and we spent some time (attempting) to spin this into thread. Sandot's mother was the expert here, when she wasn't basket where as I somehow kept ending up with a big fluffy mess. The spinning wheel was great to see,, I've only ever seen really expensive carved spinning wheels back in Scotland, it was lovely to see one obviously just thrown together out of bamboo. You can see pictures of this below. 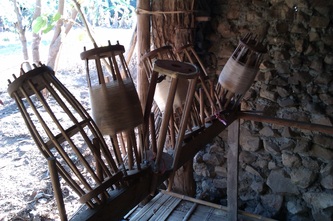 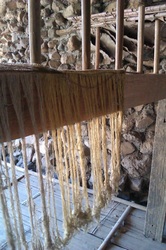 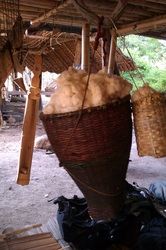 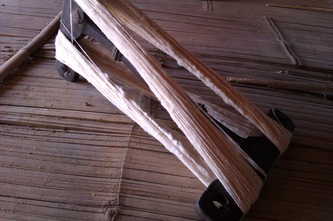 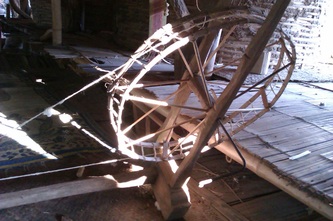 The first morning we awoke to several folk coming to fix a new roof on our hut. The roof pieces were made entirely from dried leaves tied together with strips of bamboo, and were tied onto the roof structure with, as always, strips of bamboo. Starting to see just how amazing and versatile bamboo is. We helped out and had a new roof in under an hour. Each strip of leaves, about 3 foot long, cost around 5 baht to buy, which is about 10p just now. This makes this a really cheap roof, and this is the style of most of the roofs of the bungalows and huts around here. I'm not sure how long they last for, but somebody told me that they'll be good for a couple of years at least. 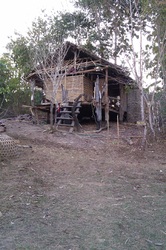 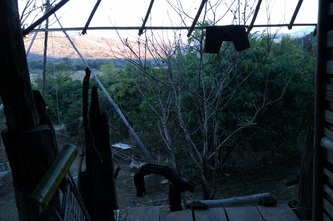 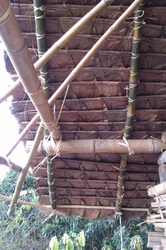 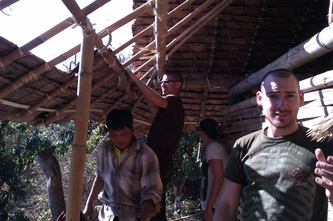 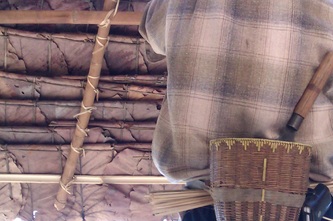 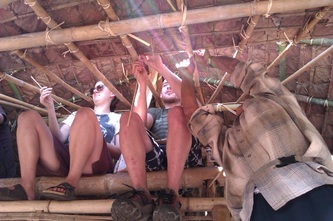 There was also some natural building to be done, so I got nice and muddy and squished around in a big muddy pit for a morning mixing the mud, water and rice husks together with my feet, making the mortar for setting the bricks that had been made earlier using the same mix. The mud bricks had been left to dry in the sun for several days, their structure and shape help together with the fibre from the rice husks. By the time we came to use them they were completely solid.
We finished building one of the walls of the house using our new mortar before the heat of the day kicked in and we called it a day.
Tacomepai is a really special place. There was a lot of opportunity for experimenting there, and some obvious possibilities for projects and designs; although there were always volunteers there and an abundance of sunshine, water and flat ground, apart from the rice there wasn't really any food growing there, and so all food for meals was bought un-organically at the local market. This really surprised me, but it seemed as though building was the main focus, and a lot of time and volunteer power had been used in this way. One small veg garden had recently been started, but it was only big enough to provide for several people, not for the numbers who came to visit and work.
This just seemed so strange to me as I work the other way round; for me it is always the garden that I think about first, making sure that there is going to be food for the people staying there and giving that top priority. But as one volunteer said, the people who visit here generally are all short term, so nobody wants to start something that might not be looked after by the next folk visiting. And people like to get stuck in and do things that they can see take shape instantly, like natural building. Reminded me of our government, in a way.
Despite the opportunities for developing designs at Tacomepai, we only stayed for around a week as living there with Ohli was a real challenge, being the only child there was rarely any food that was communally made before his bedtime or that didn't set off his chilli sensors. And as it's winter in Thailand (I'd forgotten that that exists) it was dropping down to 5 degrees at night, and our beautiful but draughty huts were causing lots of shivery visible-breath-in-bed nights, even though I was keeping a fire going to try and keep us warm. We moved onto Pai town and chocolate banana pancakes. Hardcore country folk as we are.