Reducing our needs
Firstly, the major thing that has become clear for me whilst thinking through our power needs, is that wherever we can reduce our energy needs we can reduce the cost of installing our new system. Fortunately, after living on the land for a year and a half with no power at all we know we have learned to live with very small power needs, and it is now very normal to us. Also, as we are often a travelling family we are very used to being without power and the little luxuries it brings.
One large impact on our house in regards to needing less power for us will be opening up another window in the main house. In the mornings, even though there is light outside, it doesn't hit the West facing window in the house and I often need to light a candle for our breakfast, if it's too cold to just breakfast outside, as we usually do. So a new window in the East facing wall will change the light in the house completely.

It is clear from my research so far that solar and wind power are going to be the major providers for our energy needs at home. These will be supplemented by converting some of our items, such as washing machine and blender to bicycle power. As sunlight is our most dependable and regular resource, I have decided that this will be our main source that we base our system on. Also, as we have been able to source some very reduced rate solar cells, it will also be pretty financially viable for us to install. The major cost will be in the wiring system and battery bank, which we will need for both solar and wind power.
I am placing wind power as a secondary energy source for now, as we haven't yet done any proper calculations on the land to see how much power we could gain from this, (as we''re in the UK just now) though I am expecting it to be quite high. Also, as we won't be able to get hold of our home made turbine for several months, it makes more sense now to build the solar system, iron out any kinks in that and make sure that it is working properly, and then move onto wind power as and when our needs begin to increase. It will be very nice to have access to both forms of power, as we will gain much more resilience with the diversity that will bring, and the strong winds often come over night, so will charge the batteries when the solar panels are not. This could create a very nice balanced system.

In order for us to fill our batteries with 100Ah per day, I've been doing some calculations on the size of solar panels we will need.
Each solar cell gives 0.55v of power. So, by connecting 36 cells together you create 19.8 volts, just enough for the voltage to flow into the batteries to charge them. This creates 50 Watt panels, which normally are 2.5 Amps. Based on 7 hours of sunlight per day, (our yearly average in Spain) each one of these panels will give us 17.5 Ah per day. As we need 125 Ah per day, we would need 7.14 of these panels. I've calculated that this would be the same as one 357 watt panel. So, if we build ourselves 3 x 120W panels, connected in parallel, this will give us 360 Watts of power, perfectly filling our needs.

We ordered 2 kilos of solar cells from Demand Energy Equality, which should be enough for us to build our 3 panels. They have some great tutorials and guidance on how to do this on their website, so I'm pretty confident that we can make them successfully.

Inverter's transform the 12v DC current into 230v AC current, the normal current of mains electricity. There are sure to be times when we want to plug in appliances that can't be charged directly by the 12v system, and need to be run off the mains current. They're not ideal to use for everything, as some power is lost through the transformation (with between 70-90% efficiency normal) and they need to be connected directly to the battery with short thick wires to minimise power loss. They are also quite expensive. There are several different types of inverter, with pure sine wave the best for use with delicate things like computers. For appliances with motors, the inverter needs to be able to handle 3 times the wattage of the appliance to be able to handle it starting up. And of course, the more powerful the inverter, the higher the cost. We can manage with a small one, as we have no high power needs appliances.
Wiring
As our system will be relatively small we will be sticking to 12v. This also means that we may be able to run 12v equipment directly from the panels rather than running them through an inverter to change the voltage up to mains levels, and we won't be losing any power in the conversion. This means possibly visiting caravan scrap yards to see what exciting 12v things they offer, and maybe even using a car stereo (connected to some nice speakers, of course) instead of a standard house stereo.
Electricity is lost through the wiring system at a rate depending on the length and size of the wire. A loss between 1-5% is generally acceptable. With our size system and location, I'm going to use wire of a diameter of 2.5mm.

When the current coming from the solar panels drops, (in the evenings or under clouds) a charge controller needs to be in place so that the current then doesn't start to flow back from the batteries into the panels. And between the appliances and the batteries a deep discharging regulator stops the appliances taking more power from the batteries than you want them to, stopping them from becoming too drained. These regulators can be combined in one.
Below I've made a circuit diagram of the system I'm thinking to build. I've included 3 solar panels, each 120 Watts, wired in parallel to create 360 Watts. Next to the panels I've added an ampmeter so I can check the amps coming from the panels. This feeds into the regulator, past a switch to manually disconnect the solar panels if we should need to. The batteries are connected via a fuse, and are also wired in parallel. In this diagram I've added 4 12v batteries each of 100Ah, though we may start off with only 2 batteries, which will provide the same amount of stored power but with a greater discharge rate. The voltmeter is connected to the batteries to measure the battery voltage.
An inverter is connected directly to the batteries with short, thick cables, as it loses power very quickly. This is only for use with electrical items that cannot be adapted to work from 12v.
And finally the appliances are connected to the regulator via a fuse and switches. These can either be fixed circuits, possibly for lighting, or via a plug socket for movable items. 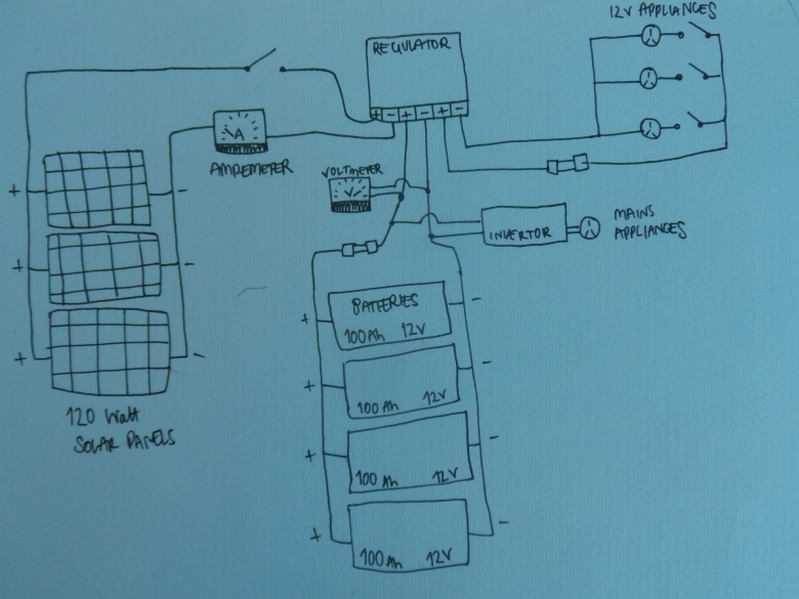 The circuit diagram of my intended solar system

I'm going to use bicycles for the things that we need power for that can also have their needs met by mechanical means. Both washing machines and food blenders involve a simple rotational force that can easily be met by bicycle power, without needing a huge amount of energy input. Here are some examples and design ideas for both of these elements.

Blenders need such little energy when supplied by mechanical forces, and now it's getting much more commonplace to see bicycle blenders making smoothies at festivals and green gatherings across the country. Here are some links on how to create the simple pulley system that I'll be following.
On to the next page, the implementation plan, here